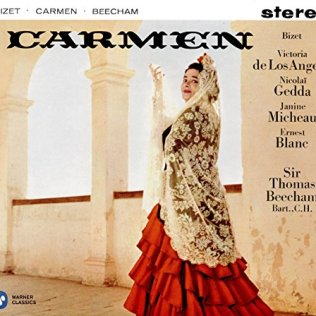 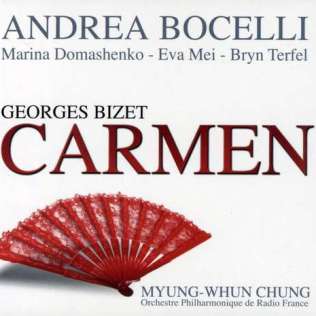 Carmen is one of the most frequently-performed, well-known, and accessible operas in the world. It is filled with glorious, tuneful music, much of which those who are completely dismissive of opera will recognize immediately. It was Tchaikovsky’s favorite opera, no slouch in that department himself. It was Bizet’s only real success (and a blockbuster one at that), and the last opera he composed before his untimely death at age thirty-six. His final work was sadly not recognized as a masterpiece until after he died. Numerous selections from the work are now among the most famous of all opera numbers, and rightly so. It is a fantastically entertaining work.

Many people are familiar with the lively overture, Carmen’s seductive habanera, the toreador’s bombastic entrance, and Carmen’s death. The finer points of the plot may escape them as well as some other wonderful music, which flows through this work from beginning to end. A live performance of Carmen is not something you will soon forget, and as such, I recommend it as a great choice for anyone who has never seen an opera.

So let’s get started. The opera starts off with a bang via a lively, loud and infectious prelude that is thrilling. It also makes an appearance later on.

The scene opens outside a tobacco factory, where a changing of the guard is about to take place (why there are soldiers at the tobacco factory has always escaped me). There’s a catchy number as people walk about the square, followed by an even catchier one, avec la garde montante, sung by a chorus of children, who are imitating the soldiers. Here it is, sung in Russian, in a wonderful recording from 1977 (see below):

Micaela, an innocent village girl, enters, looking for her sweetheart, Don Jose, one of the soldiers (and the protagonist of this opera). He’s not there yet, but his fellow soldiers waste no time flagrantly flirting with her. Just then, a bell rings and the tobacco factory girls emerge for a break in a musically beautiful scene. They’re all smoking (how attractive!), and one of them, Carmen, is quite the little vixen. She’s a gypsy, and she sings her very famous habanera in front of the soldiers, extolling the virtues of being a free spirit:

Micaela finally meets up with her lover Don Jose (whom Carmen has already eyed) and gives him a letter from his mother (he’s an innocent Momma’s boy, and therefore all the more tempting to Carmen). Micaela and Jose engage in a long musical duet that is quite pretty in spots. His mother wants him to come home and marry Micaela. Suddenly, a ruckus breaks out in the factory, and Carmen is accused of attacking another woman with a knife. When confronted, she is defiant and basically sings the musical version of “f*** off!” (tra la la la la):

Don Jose is ordered to arrest her, and he begins to tie her hands. She then flirts with him, singing a sexy seguidilla (a Spanish dance), Pres des ramparts de Seville, and promising him a night of passion at the tavern of her friend Lillas Pastia if he will run away with her (do you think he’ll fall for that?):

He is beguiled by her and lets her go free, leading to his arrest as she laughs and runs off. She clearly knows how to get her way. Two months pass, and Carmen is at the tavern entertaining some soldiers. Don Jose has recently been released from his detention for letting her escape. With two friends, she sings and dances the lively number les tringles des sistres tintaient (be patient, it slowly warms up to a fantastic frenzy!):

Outside there is a commotion, as a crowd is cheering the arrival of the toreador (bullfighter) Escamillo, who makes a grand entrance with the ultra-famous “toreador song,” votre toast, je peux vous le rendre. Listen to the audience go wild at the end of this fantastic performance by Samuel Ramey as the toreador (the applause actually continues far beyond the end of this clip):

Escamillo (the toreador) notices Carmen, but she is busy fretting over the recently-released Don Jose. Some smugglers arrive (the tavern is a hot spot of smuggling activity), and Carmen’s two friends agree to assist them, but Carmen wants to wait for Don Jose to arrive. He does, and she again treats him to a seductive dance (her third now?), Je vais danser en votre honneur. A bugle sounds, and Jose says he has to leave. Carmen mocks his callousness, whereupon he confesses his feelings in this opera’s most tender and heartfelt aria, La fleur que tu m’avais jetee, in which he tells her that he kept the flower she once threw to him, and it consoled him in prison:

Carmen is not convinced, and says that if Jose loved her, he’d run away with her (and the smugglers). He protests and is ready to leave her when his commanding officer, who is also sweet on Carmen, arrives. They get into a fight over her, and, since Jose has struck a superior, he now has no choice but to abandon the regiment and join Carmen’s gang.

Act three opens with a tender flute, harp and oboe instrumental. We then see the smugglers hauling their contraband, Carmen and Jose among them. The gypsies are reading fortunes, and Carmen discovers that death is predicted for both her and Don Jose. She and her friends go off to distract the guards, while Jose stands lookout. He almost shoots Escamillo, the bullfighter, who has come in search of Carmen, whom he is smitten with (isn’t everyone?). Jose, of course, doesn’t like hearing this. To make matters worse, Micaela shows up (remember her, his goody-goody girlfriend?) and tries to lure him away from Carmen and his life of crime. When that doesn’t work, she informs him that his mother is dying. That does the trick and he departs, predicting that he’ll see Carmen again.

Act four opens with a rousing entr’acte as the scene opens outside the bullfighting arena.

We also hear a reprise of the lively music from the overture that opened the opera as the cuadrilla arrives (the bullfighter’s assistants), followed by Escamillo, with Carmen at his side (both in resplendent outfits). They profess their love for each other in a lovely duet (si tu m’aimes Carmen).

Carmen’s friends warn her that Don Jose is in the crowd, but she says she is not afraid. Jose finds her, is still smitten, and flies into a jealous rage when she rejects him and professes her love now for Escamillo. Jose promptly stabs her, and we have a classically tragic ending.

Overall, gorgeous and memorable music (including the entr’actes), great costumes and scenery, and an interesting story line. Bizet’s last and greatest effort is a keeper.

Sure, this is a dated production (1988) and thus not up to today’s audio and video standards, but I thoroughly enjoyed it nonetheless. The singing was great, the orchestra was even greater, and the costumes and sets provided plenty of eye candy (Carmen’s outfit in the last act, as well as Escamillo’s, are stunning). Samuel Ramey, as Escamillo, performs the best toreador song I have ever heard, and gets a well-deserved thunderous ovation for it. Jose Carreras earns one that is just as enthusiastic for his flower song. I did find Carreras a little distant – he didn’t have the same presence as either Carmen or Escamillo, meaning he seemed to be singing and acting as if there was no audience there – he just didn’t connect with them, or with me as a viewer. He even looked this way in his curtain calls. Helloooo? Regardless, the production was quite enjoyable. Carmen (Agnes Baltsa) handled all of her material well and inhabited the role quite admirably. The whole opera is packed onto one disc, which is convenient, and there is a substantial booklet with scene-by-scene synoposes. A worthy addition to any opera collection, and a great introduction to opera for any newcomer.

This wouldn’t be my first choice for a Carmen DVD. The disc itself is pretty no-frills, with no menu options except to turn the (English-only) subtitles on or off. That’s it (aside from chapter choices). And the subtitles are poor, in that there frequently aren’t any for several sentences. Visually, the Met production (with Baltsa and Carreras) has it all over this one in terms of sets and costumes. The Escamillo here I thought was very weak, especially in his big number, which failed to excite. Also, I can’t get used to the British custom of not applauding after major arias – it was like watching a dress rehearsal (with no audience). The orchestra under Zubin Mehta was good, but here again I prefer the Levine-led Met production. I did like that both Carmen and Don Jose very much look their parts, and their acting and singing is good. I particularly liked Don Jose’s flower aria, perhaps better than that of Carreras. Lima made an excellent Jose and I prefer him to Carreras, who failed to connect with me. I feel just the opposite about Carmen; the one here (Ewing) is too sulky for me and she lacks energy, while Baltsa (on the Met DVD) has more energy and charisma. Micaela was wonderful, the best one I’ve seen as this role usually bores me. Not so here. So, the pluses here are Lima as Jose and Vaduva as Micaela. The minuses are an overly sullen Carmen, a weak Escamillo, and spotty subtitles. Overall it’s OK and worth adding to a collection, but if I had to buy only one, I’d choose the Met production with Baltsa, Carreras and Samuel Ramey as a fantastic Escamillo. His Toreador Song is the best I’ve seen, full of energy and bravado, as it should be. He gets a thunderous ovation – American style – that was well-deserved.

I was attracted to this recording, which I found by accident, because I usually like Yuri Simonov’s conducting, and I love Carmen. What’s more, it was Tchaikovsky’s favorite opera, and, as he is a hero of mine, it seemed fitting that I listened to this in his native Russian (even though he also spoke French). What a delightful surprise this recording turned out to be! The orchestra and singing are fantastic. Simonov tends to take the tempos slow and dramatic, just as I prefer them. The sound has an overall presence and immediacy to it (this is a live recording), and while there is some stage noise and the recording was made with older technolgy (1977), I really liked its soundscape. Every note felt fresh, and Simonov treated each one with tender-loving care. I’ve found several of these older Russian recordings to be top notch (also check out Tchaikovsky’s Eugene Onegin conducted by Fedoseyev). It is a little jarring to hear some of these famous numbers sung in Russian, but it actually provides a way of hearing the opera with new ears. Maybe not the best choice for newcomers (it should first be experienced in its native French), but highly recommended for existing lovers of Carmen.

I am a lifelong entrepreneur and lover of words and literature. My interests include writing, reading, poetry, Shakespeare, American history, the presidency, introversion, opera, classical music, Broadway shows and metaphysics.
View all posts by Tim Michaels →
This entry was posted in Opera of the Week. Bookmark the permalink.