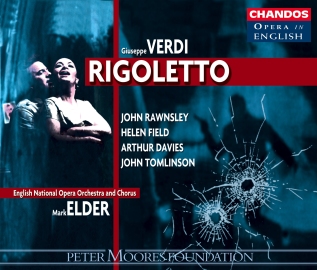 Recommended video recording/s: (none yet!)

I’ve been a sloth when it comes to Verdi’s operas – relatively slow to recognize their delights. The first few times I heard Rigoletto, it didn’t really grab me. Sometimes it’s just a matter of finding the right recording, or perhaps listening undistracted with headphones. I first listened to a Callas recording (whom I adore), then Pavarotti (whom I also adore). I then watched an older video performance featuring a very young Placido Domingo and the wonderful Cornell MacNeil. But it wasn’t until I listened to the Chandos recording of this opera – in English – that it really spoke to me. Maybe I needed to know what they were singing about, or maybe it was just the crisp, resonant sound of this recording, or maybe it just took a few listens overall, but this is now one of my favorite operas. There are glorious arias and duets, and a delicious quartet that will lull you into a transcendental state better than a deep meditation. While, like many operas, the plot is a bit odd (which is maybe why the Metropolitan Opera recently updated it to 1950s Vegas), perhaps it is not so hard to sympathize with Rigoletto’s starry-eyed daughter when we remember the intensity of our own first love.

The opera opens with an overture that forebodes the drama to come, then switches abruptly to a gay soiree that is taking place at the Duke of Mantua’s pad. He’s a bit of a Don Juan, this duke, and Verdi wastes no time in starting us off with the duke’s famous aria (Questa o quella – this one or that one), bragging about his flitting from one affair to the next.

Seems the duke has been eyeing this girl in church (in church, no less! Is nothing sacred?), who happens to be his court jester Rigoletto’s daughter. Rigoletto only lets her out of the house to go to church, but clearly that is not going to protect her from being noticed. After gushing about this girl, the duke’s roving eye starts wandering and he hits on the ladies at his party, including the wife of Count Monterone. The count confronts the duke, and Rigoletto dutifully makes fun of the old man. Monterone then curses Rigoletto, scaring the bejeebers out of him. He’s a superstitious one, Rigoletto.

Meanwhile, the men at the party discuss how Rigoletto has a woman holed up in his house who they think is his mistress (it is really his daughter, Gilda). They decide to abduct her to get back at him for always making fun of them. Later at Rigoletto’s house, Gilda gets a surprise visit from the licentious duke, who professes his love for her. She is duly wooed, and after he leaves she sings another famous aria about her complete infatuation with him and his name, Caro nome (dearest name). Yup, she’s got it bad.

The duke’s pals abduct Gilda (with Rigoletto’s unwitting help – that damned curse!), and bring her to his palace. Of course, in typical Three’s Company fashion, they don’t know the duke is enamored with her, or that she is Rigoletto’s daughter. But all is soon revealed, and Rigoletto angrily condemns the courtiers and the duke, and sets out to prove to his daughter what a pig the duke is. He takes her to spy on the duke as he woos yet another woman. The duke is busy bragging again in another ultra-famous aria, La donna e mobile (“women are fickle” – he’s one to talk!), which will figure prominently in the plot later on.

While Gilda and Rigoletto are spying on the duke, a wonderful quartet ensues between them (outside) and the duke and his new lover (inside). WARNING: Cleavage alert!

Gilda is still smitten with the duke in spite of his unfaithfulness, and when she discovers that someone has hired an assassin to kill him (unbeknownst to her, it was her father), she, dressed as a man, arranges to take his place. The assassin kills her. When Rigoletto returns to pay him, he hears the smug duke singing “La donna e mobile” and realizes that he’s been duped. When he opens the sack with the corpse and discovers it’s his daughter Gilda inside, he knows the curse has come to fruition.

I’d highly recommend listening to this opera in English

first, and then venturing out to either the Sills/Milnes

set, or the Pavarotti

one. There are many recordings of this opera. Sample a number of them to determine which one sounds best to you. When you find that one, it will be an eternal treasure.

I am a lifelong entrepreneur and lover of words and literature. My interests include writing, reading, poetry, Shakespeare, American history, the presidency, introversion, opera, classical music, Broadway shows and metaphysics.
View all posts by Tim Michaels →
This entry was posted in Opera of the Week. Bookmark the permalink.